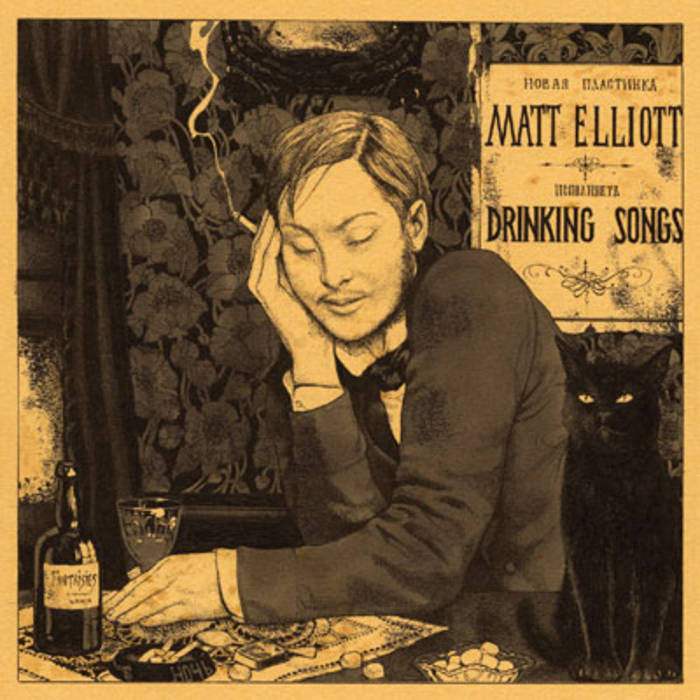 
After 8 albums mainly published under the name The Third Eye Foundation by Domino rcds (Franz Ferdinand, The Kills, Pavement ...), Matt Elliott now lives and works in France and chose Ici d'ailleurs to release his "Drinking songs" which confirm his evolution to a tormented folk, which owes as much to his electronica roots as to his taste for Slavic & Eastern European music.

His collaboration with Ici D'ailleurs started in 1999 when he remixed Yann Tiersen's "La dispute" on the label's sampler. This song also opens his remix album, "I poopoo on your juju" (Domino).
He also opened our OuMuPo collection with a great mix which really sound as Matt Elliott album (www.oumupo.com)

Matt is an historical figure in electronic music. Originally from Bristol, UK, he started out with the "Flying saucer attack" project and AMP among others. He created with The Third Eye Foundation a very personal dark and organic electronica.

Today, he translates his former works' dark and oppressive atmospheres. "Drinking song" puts an emphasis on distant voices and ethereal ambiences. Guitars and keyboards are getting softer, almost affectionate, sometimes overwhelmed by drum n' bass beats that carry the song upward. Choirs and echoes give an almost mystical dimension to the album. All the songs hold the audience spellbound.

Matt Elliott has a real gift for carrying the listener to parallel worlds, for appealing to memories and imagination. His music floods the room and creates an insistent and hypnotic atmosphere, both lascivious and violent.

This album invites introspection, never taking the easy way out. Matt Elliott delivers a marvel of sensitivity, a precious moment of lucidity and perceptiveness. An alchemic instant.

New Matt Elliott album "Farewell To All We Know" release on 27th of March. Compact disc and vinyls available on www.icidailleurs.com

Track Name: What's Wrong
Flowers for you yet again
And the tear stained cheeks never end
We only seem to respond in kind
But an eye for an eye only leaves us blind

Featuring Gary Bartz, 5 years of Rhythm Section Intl and an LP of the week by Nicolas Jaar