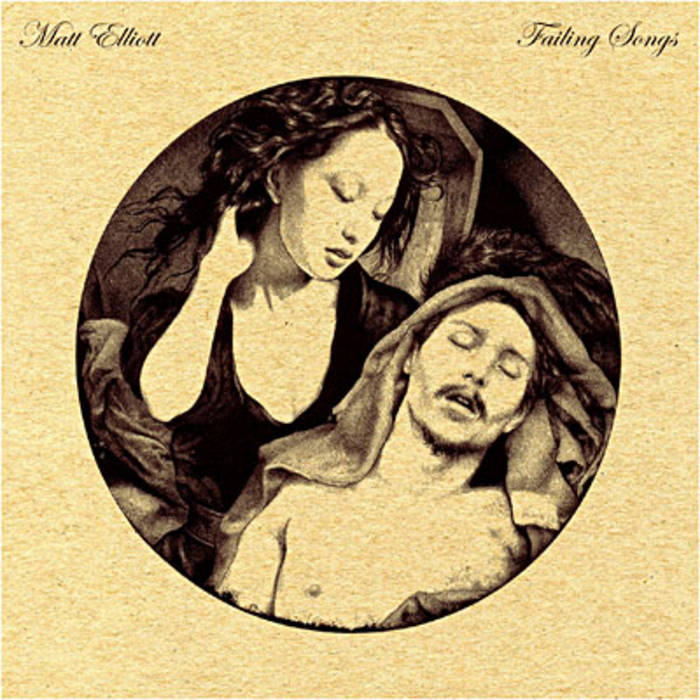 Matt Elliott has rather an atypical course... He used to work under the pseudo third eye foundation - emblematic figure of the English electronic scene recognized for his atypical electro tinted by drum' N bass. Since his first albums: “the mess we made” (domino records) and “drinking song” (Ici d’ailleurs…), Matt Elliott turns to compositions much more folk, forsaking the laptop and the machines - which go until disappearing on “failing songs”, to return to more traditional instruments (guitar, piano, violin...).

To succeed to “drinking songs”, because it’s really about songs, “failing songs” turns Matt Elliott into a true songwriter. He assumes completely his voice and sings very personal and dark texts (that we can find for the first time inside the booklet.) Songs whose subtle melodies contrast with the hardness of the words because "Failing songs" is a hard failure report. Between despair and cold anger, the texts talk about the liberal military evolution of the world that the author rejects. The Titles are as sublime as melancholic, bitter and sad, impressed by Slavic music, Greek, and besides, sometimes punctuated of Spanish guitars (the guitar which is from now the instrument of predilection, omnipresent although often combined with the violoncello’s languor), sometimes close to Dimitri Chostakovitch or Pascal Comelade’s sonorities at his beginnings an artist that Matt however reveals not to know).

“Failing songs” is one of these discs which we appreciate with several peoples or alone, an album which holds you and doesn’t leave you anymore, of those which one doesn’t arrange because their place is right next to the CD player. A sad music’s party which however reduces the heart of its listeners...


"Failing Songs is kind of part 2 of the Drinking Songs Trilogy & features the wonderful Patricia Arguelles Martinez on Violin & of course Chris Cole on Drum duties. It was all recorded at home except the violins which were recorded over night(s) in the village church. It's always hard to talk objectively about ones own music so I won't.Without wanting to put anyone off, the songs are mainly about our failures both personal & political & no objective person can really look at the world without accepting the fact that we as a species are basically a failure. I'm definitely one & glad to admit it. Incidentally i believe that the lyrics of at least one song will contravene some of the new laws passed by the British government to curb our basic freedoms in the name of counter terrorism but given that they are so out of touch with modern culture it shouldn't cause too much trouble."
Matt Elliott

New Matt Elliott album "Farewell To All We Know" release on 27th of March. Compact disc and vinyls available on www.icidailleurs.com

Track Name: Gone
Face full of sun
And we run
'til we lose our way
Bad thoughts are gone
War is won
And all's in it's place
The day's all ours
Until we trip on a grave
Birds stop their song
As you turn to me and say
We will be gone

Featuring Gary Bartz, 5 years of Rhythm Section Intl and an LP of the week by Nicolas Jaar